Cowboy landed himself in hot water at the weekend after using a homophobic slur in his criticism of Cormier's performance against Anderson Silva at UFC 200.

Speaking at an event alongside CM Punk and John Gooden, Cerrone claimed the light heavyweight king "fought like a f*g" against the living legend because used a wrestling-heavy gameplan which saw him secure a dominant unanimous decision victory.

Here's the controversial comment from Donald Cerrone at the #UFC200 Fan Expo. pic.twitter.com/rd1jPPMPrZ

END_OF_DOCUMENT_TOKEN_TO_BE_REPLACED

Following a shit-storm of backlash, Cerrone apologised to the LGBTQ community for using the offensive word, but did not mention Cormier in his Instagram post, which has since been deleted.

Cormier had been training for Jon Jones for the entirety of his fight camp, bur that fight fell through when Bones failed a pre-fight drug test. Silva, regarded as one of the greatest strikers in MMA history, came in as a very late replacement with nothing to lose and the champion decided to utilise his elite-level wrestling to get the win.

Speaking on this week's episode of the MMA Hour, Cormier tore Cerrone to shreds over his criticism.

"My reaction to Donald is shut up. Has he lost his mind? I mean, what was this guy talking about? Donald Cerrone, who made you the person? On what ground does he stand on to be able to say something like that to someone like me?" 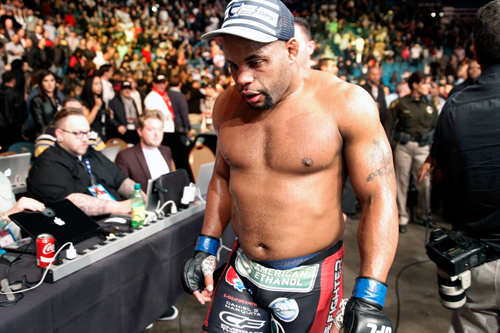 Cormier took umbrage to Cerrone's decision to voice his criticism in such a public forum. He added that the top ranked lightweight/welterweight had no right to judge his fighting style when he has some very lopsided losses on his record. In comparison, Cormier has just the solitary loss on his record, a five-round war to arguably the greatest of them all, Jon Jones.

"He can tell me stuff. If he had a problem with the way I performed, he could have told me in the back that day. ‘DC, it wasn’t a very good fight, man, I didn’t like it.’ But to do it publicly? Who are you? Are you the greatest fighter of all times? Are you the guy that went out there and got stopped in the first round by Anthony Pettis, that kick in the side and fell down? Are you the guy that got dominated by dos Anjos in the first round, where you just fell down?"

"I’ve been nothing but a gentleman to that guy, and he just likes to talk. Maybe he was drinking a little bit, I don’t know. But who is he to make that decision, and so rude about it? That’s a type of thing that’s upsetting."

Cormier also fired back at Cowboy for his use of the derogatory term, especially considering his comments came a day after Amanda Nunes became the first openly gay champion in UFC history.

"It’s very disappointing, especially under those circumstances, with everything that happened in Orlando and everything, he uses that word and those terms. Man, nobody is exempt from just being like… you have to have some class, man. Hey, Donald, this isn’t the wild wild west where you can walk around with your stupid cowboy boots and your hat and spitting tobacco and just talking crazy. You have to have respect and carry yourself with some class."

"You don’t disrespect me like that. At the end of the day, I’m a man. When I see him, we’ll have some words, and we’ll discuss it."

Oh to be a fly-on-the-wall when that conversation happens.