There was a bit of confusion in the media room when Conor McGregor made the big announcement that had been teased for so many months.

"March I think," McGregor answered when asked when his firstborn was due.

That was greeted by a swift interruption, presumably from his long-time girlfriend Dee Devlin, who corrected her partner by claiming that her due date wasn't until May.

'The Notorious' revealed that he would be stepping away from the Octagon so that he could be present throughout the pregnancy and for the birth itself.

END_OF_DOCUMENT_TOKEN_TO_BE_REPLACED

It wasn't known whether that meant he'd take the whole of 2017 off and, in truth, it's still not.

But UFC president Dana White has finally commented on the expected hiatus of his most reliable cash-cow, confirming that we won't see McGregor before next summer.

END_OF_DOCUMENT_TOKEN_TO_BE_REPLACED

“He won’t fight before May,” White told the LA Times. “His girl gets super stressed out when he fights. He doesn’t want her having any of that stress while she’s pregnant.

"He’s good. He should take time off. He’s been fighting nonstop. Nothing wrong with him taking time off. It’s good for him and her and it’s good for the baby.”

White likely couldn't believe his luck over the last year as he presided over a record-breaking 12 months that saw McGregor responsible for roughly six million pay-per-view buys stretching across his last four bouts at UFC 194, UFC 196, UFC 202 and UFC 205. 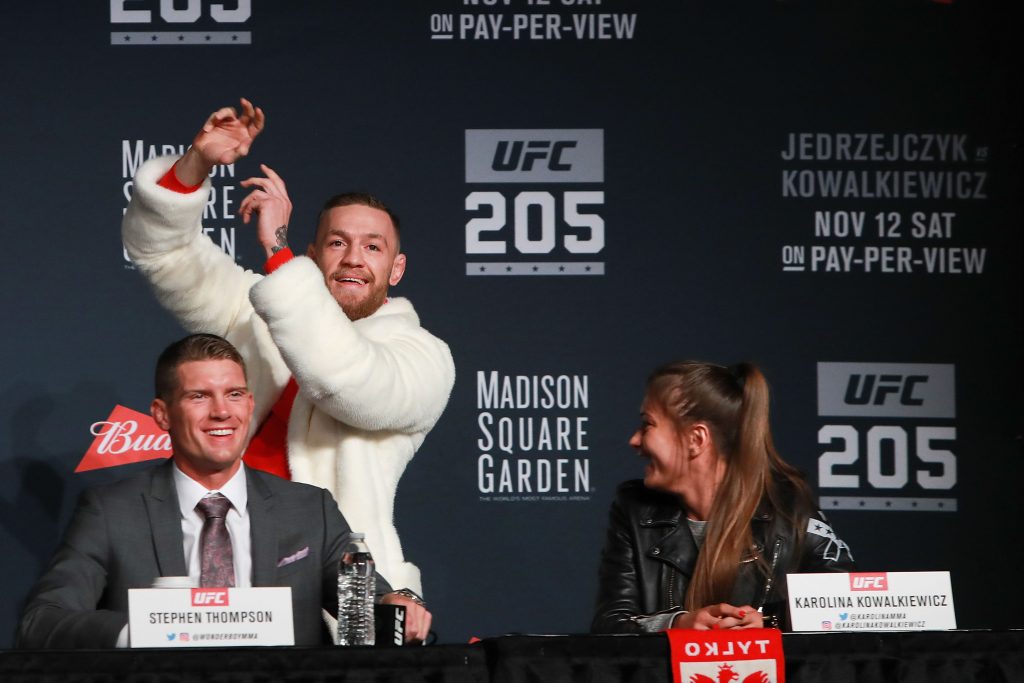 END_OF_DOCUMENT_TOKEN_TO_BE_REPLACED

There can be no question about the Dubliner's drawing power which is, by some way, more significant than that of fellow superstar Ronda Rousey, who also took a lengthy break from fighting before her scheduled return at the end of this year.

But White is not concerned about going without 'The Notorious' for the coming six months, at the very least.

“We’ve done this for 16 years, with a lot of big stars who couldn’t fight or moved on – Chuck Liddell, Anderson Silva, Georges St-Pierre,” White said. “There’s not a day in this office I don’t get the question, ‘What are we going to do about this guy?’ Every day I turn around, I’ve got a reporter saying we’ve peaked.

“If I listened to any of that — we probably would be done."

Unsurprisingly, White wouldn't be drawn on commenting on McGregor's demand for an equity stake in the company.

That's very much a let's wait and see.


popular
The four stone-cold certainties for All-Stars even as early as this
Kylian Mbappe reportedly wants PSG to sell Neymar
Eamon McGee just couldn't help himself with Armagh-melee tweet
Former England Under-21 captain open to playing for Ireland
"He's actually smiling putting the ball over the bar. He should nearly be fainting." - Ryall on Limerick's legacy
Anthony Joshua admits that he was 'let down by his corner' during Oleksandr Usyk bout
"The economy was one of the big reasons" - Cadogan's move from an electrician to personal training
You may also like
1 month ago
Conor McGregor says he knows his next UFC opponent and fight date
1 month ago
Commentating cage-side, Daniel Cormier missed the UFC knock-out of the year
1 month ago
Conor McGregor responds to Michael Chandler's callout after UFC 274
1 month ago
'All those guys are overpaid' - Dana White slams boxing salaries
2 months ago
Francis Ngannou wants a Tyson Fury clause in his new UFC contract
2 months ago
Daniel Cormier makes fair point about Dean Barry's UFC debut disqualification
Next Page