Eddie Alvarez made it clear at the pre-fight press conference that he was content to play the heel role in his fight against Conor McGregor at UFC 205.

The undisputed lightweight champion was greeted by a chorus of boos when he stepped out on the stage to promote UFC 205's main event. He soaked it all in, standing up to ask where his absent opponent was, who was running late to the presser.

He then went after the country of Ireland, claiming that McGregor being late somehow offended his Irish heritage.

"I'm half Irish. I'm disappointed in the country of Ireland right now that this is your representative."

Then he proceeded to offend the Irish fans in the room by taking off McGregor's accent, before making a swift exit, foolishly leaving his belt unattended on the table.

"I don't understand shit they say. They're from Ireland. They don't even know their numbers."

When McGregor finally showed up, Alvarez couldn't let him have all the fun.

Aside from the whole matter of potential history-making fight on a historical card, the other big storyline from UFC 205's headliner is this "left-field" announcement that McGregor has been teasing in the build-up to fight night.

Forever the showman, McGregor refused to let any new information slip when asked about it and instead used the question to promote the card.

"Don't worry about it. Just buy that PPV twice."

However, Alvarez piped up at that moment, claiming he knew exactly what the announcement was. He didn't get the reaction he might have liked and instead kept it to himself.

When he was asked by another journalist what he thought the news could be. Alvarez was practically rubbing his hands together as he responded with a huge smile spread across his face from ear to ear.

"Conor's having two kids and his girlfriend's not having twins, so you guys do the math."

He looked over to McGregor, who didn't respond. In fairness, the crowd was so loud inside the room that he may very well have not heard Alvarez's taunt. 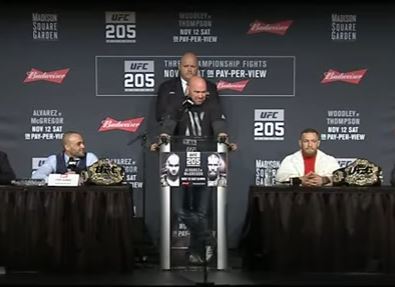 
popular
"I remember someone saying, 'This guy's the best of the lot of them. Just wait for him'" - Brian O'Driscoll
Emotional Robbie Savage introduces son Charlie's Man Utd debut while on commentary duty
"I trained with a guy that was born in 2004 the other day. We reckoned Earlsie could be his father!" - Peter O'Mahony
Nigel Owens on most annoying players to referee (three of them are Irish)
The story of the GAA's greatest ever minor
Six All Blacks but no Ireland players in world's top 20 list headed by Antoine Dupont
"I asked one question and lads slagged the arse off me!" - Johnny Sexton on Roy Keane chat
You may also like
1 month ago
Dublin's Ian Garry scores sensational knock-out win at UFC 268
1 month ago
UFC star Paddy Pimblett "kicked out" for celebrating Liverpool goals in Watford end
1 month ago
José Mourinho swaps Conor McGregor a Roma jersey for some whiskey
2 months ago
MMA fighter Justin Thornton dies, aged 38, weeks after brutal KO
4 months ago
UFC legend brands Conor McGregor's antics a 'cry for help'
4 months ago
Joe Rogan sends McGregor invitation after explaining that post-fight interview
Next Page