Conor McGregor is in the G.O.A.T. discussion and that's not even a controversial thing to say anymore

The McGregor haters are finding it harder and harder to deny the fact - and yes, it is a fact at this stage - that 'The Notorious' is not just among the greatest pound-for-pound fighters in the world right now but that he's one of the greatest of all time.

Georges St-Pierre, Anderson Silva and Jon Jones tend to be the top three fighters, in no particular order, on the lists of fight fans when it comes to nailing down the creme de la creme.

But McGregor has come storming into that dinner party at which only the elite have a seat and he's tossing cutlery and expensive china over his shoulder on his way to the head of the table where he will doubtlessly kick his feet up on the place setting, spilling wine all over Fedor's lap.

END_OF_DOCUMENT_TOKEN_TO_BE_REPLACED

In so many aspects of MMA, he stands alone and there is not an area of the fight game where he does not excel.

Nobody has navigated their way to the pinnacle of mixed martial arts more quickly or more masterfully than McGregor while his ability to attract interest with matchless promo-cutting abilities and camp out in his opponents' heads with his green beret in psychological warfare has left him the single-best talker in MMA history. 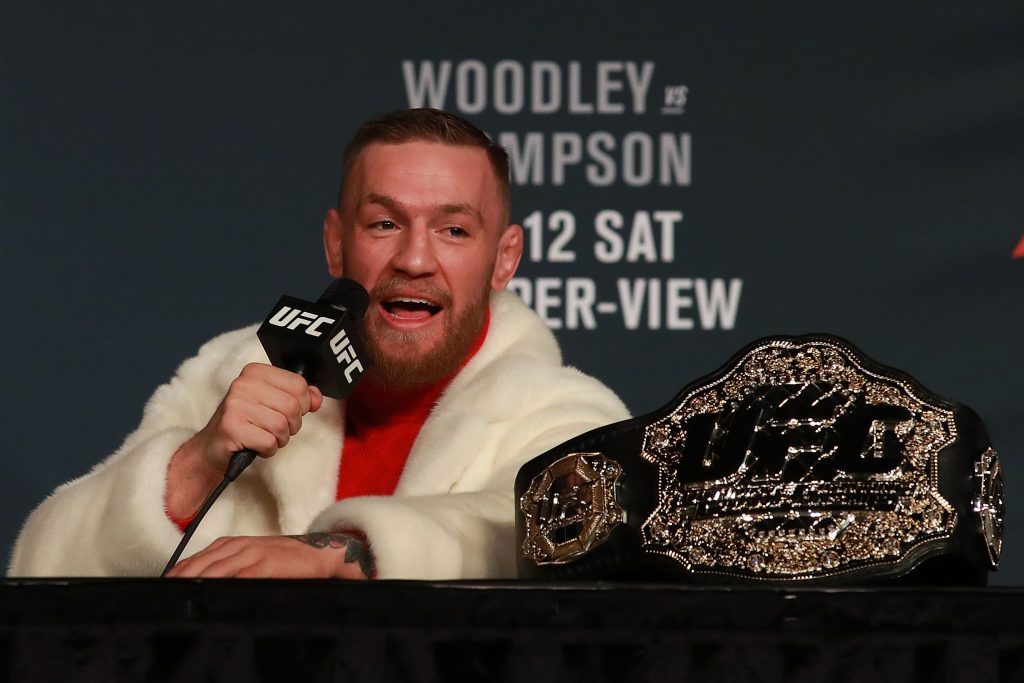 And that's not even taking into account his virtuosity when it comes to slamming pieces of padded bone into the fleshy parts of his rivals' bodies.

END_OF_DOCUMENT_TOKEN_TO_BE_REPLACED

The fact that he no longer has a free shoulder is proof enough that McGregor deserves to be spoken of alongside such examples of greatness because he did on Saturday night what nobody has been able to do.

Then-lightweight champion BJ Penn tried at UFC 94 to accomplish some shoulder symmetry when he returned to welterweight to take on Georges St-Pierre. Penn was dismantled and stopped before the stools left the Octagon to signal the start of the fifth and final round.

He had held the 170lbs prize earlier in his career but he never possessed two world titles at the same time.

Similarly, Randy Couture has been champion at two UFC weight classes but the reigns weren't concurrent. 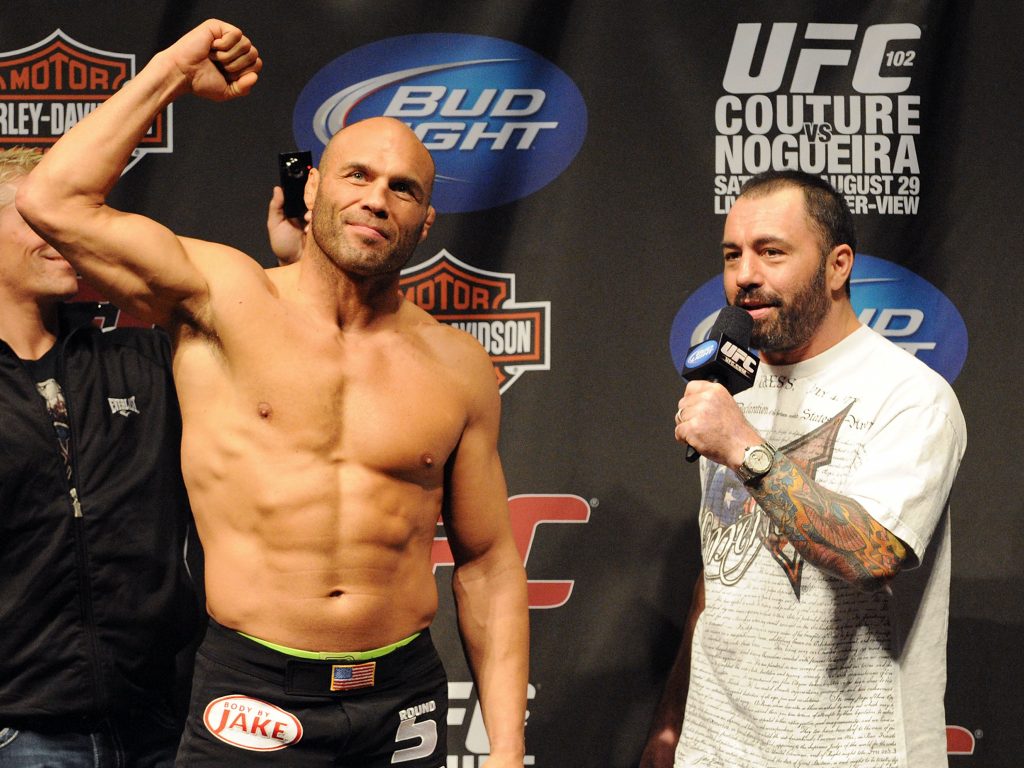 END_OF_DOCUMENT_TOKEN_TO_BE_REPLACED

McGregor, the reigning UFC featherweight and UFC lightweight champ, will forever be known as the first man to achieve such a stunning accomplishment in the Octagon and that's just the first piece of evidence in the case.

The already legendary power possessed by the Crumlin native in his gifted left hand has turned him into something of a Mike Tyson figure as his reputation precedes him at this stage.

Every time he wraps his hands, it's expected that the evening will end with a thudding, consciousness-robbing blow and each finish has been more special than the last.

Eddie Alvarez has been boxing his whole life but he was made to look like a rank amateur on the feet by McGregor, whose counter-punching adroitness made it impossible to ignore the feeling that the match-up wasn't even fair.

Let's look at the list of other victims that 'The Notorious' has left in his wake. Fellow G.O.A.T. contender Jose Aldo didn't make it fourteen seconds when he finally had the chance to touch McGregor, who also laid waste to other featherweight greats like Chad Mendes and Dustin Poirier. 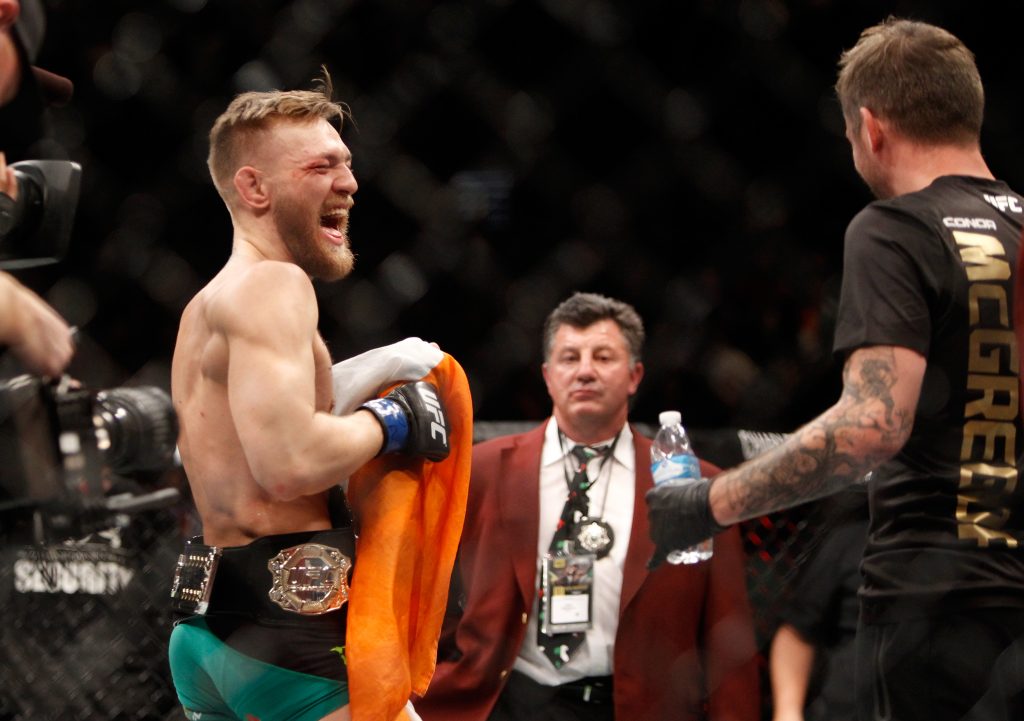 Even Max Holloway, many fans' pick for the greatest 145lber on the planet whose name doesn't rhyme with Goner McCregor, was no match for McGregor when they clashed in 2013.

The one sustained question mark that hung over the 28-year-old's skill-set was his ability to defend takedowns.

After Mendes was able to routinely put McGregor on his back it was believed by many that Alvarez, a hard-nosed wrestler who embraces the grind against the fence, would have his way with the Dubliner.

It's safe to say that that didn't happen as each shot was stuffed by 'The Notorious' on Saturday as if he was simply taking part in a sprawl-and-brawl drill.

So with no visible holes in his fight game and with Ronda Rousey the only fighter who could claim to be a close second in the popularity stakes, an argument could be made that he's the greatest of all time already.

Because highlight reels and Twitter followers can only go so far in leaving a lasting legacy for a fighter. 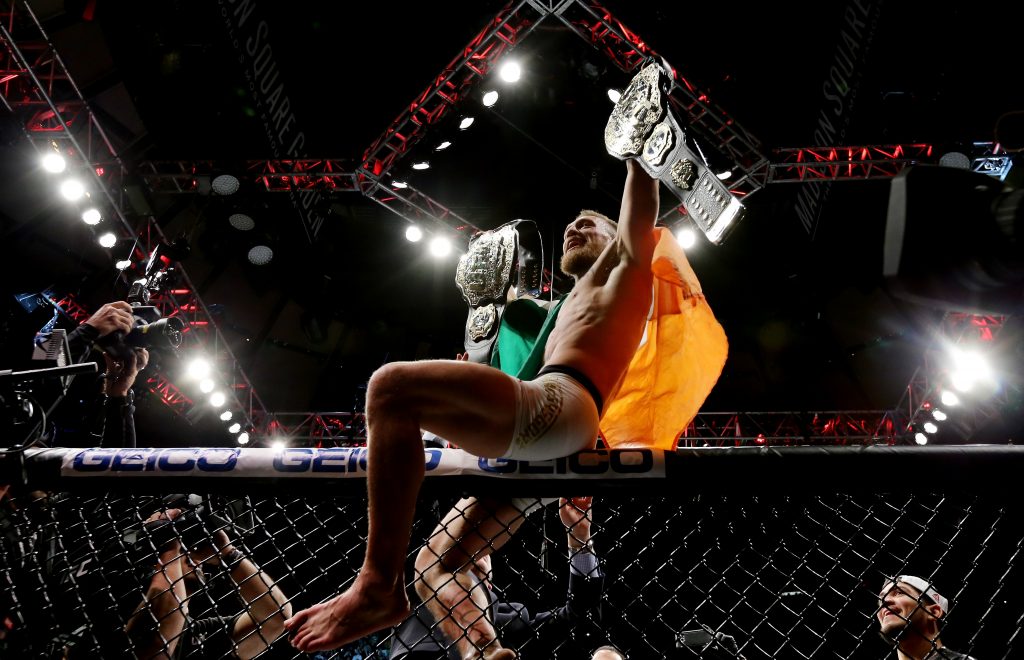 What will remain long in the memories of fight fans long after 'The Notorious' hangs up his gloves is the undeniable fact that he changed the game.

At a time when MMA was in desperate need of a helping hand into the mainstream, McGregor opened the gates and allowed the niche sport a clear path on to the television sets of a casual fanbase who needed a superstar to hang their hat on.

And that came with McGregor's impossible-to-ignore sound bites that were destined to go viral the second they breached his lips.

Sure, he's been defeated but what legend of the game hasn't?

And sure he has yet to defend a title but McGregor has clearly prioritised breaking new ground over solidifying his status as champion.

He wants a new challenge. He wants super-fights. He wants to entertain.

The G.O.A.T. discussion, whenever it is volleyed about between arguing fight fans, has more to it than sheer technical abilities or who has the more impressive pro record.

If there is more to MMA than just fighting and bout-hyping power really is half the battle then fighters should be judged on more than their skill-set.

Personality, impact on the sport, willingness to fight anyone on short notice and ability to move seamlessly between weight classes all come into consideration.

And when all those factors are taken into account, it could be argued that McGregor is already the greatest mixed martial artist of all time.

I'm not prepared to go that far just yet but to pretend like he's not even in the conversation would be disingenuous, no matter how much you might hate his antics.