If Marco van Basten did what Redmond Barry did in the Gaelic Grounds in 2008, then you'd probably have seen this video by now.

The story of the Dutchman in Limerick would have been iconic by this stage and the video, it would make the start of every total football compilation ever made.

But this is a Wexford man, and while it's better to enjoy than compare, the volley he hooked over the bar in the 2008 National Football League must surely go down as one of the most bewilderingly brilliant scores you've (n)ever seen.

END_OF_DOCUMENT_TOKEN_TO_BE_REPLACED

If, like us, you'd hadn't seen Barry's wonder-point before now then the likelihood is that this won't be the last time you'll watch it. So measured, sweet and nonchalant was the whole thing that you won't be able to help yourself only to watch it again and again and again. His non-plussed reaction is something you'll have noticed by then and almost 12 years on, Barry still remembers why, despite having scored an absolute beauty, he sauntered back out to his position like a man disappointed by the fisted point he'd just scored.

"When you're running, it's hard to judge where it's going. I don't know why I didn't catch it, I don't know why I swung my leg on it but at the time, it never dawned on me to catch it. I suppose Ciaran's shot had been blocked down and it kind of dropped down perfectly for me to take a volley at it.

"I just jogged out then like nothing had happened because I suppose I was thinking maybe I should have got a goal there. A few other lads were looking around them alright like what just happened there kind of thing."

END_OF_DOCUMENT_TOKEN_TO_BE_REPLACED

It was his former Wexford team-mate Adrian Flynn who posted the video this week and for Barry, it brought back some great memories.

"It was just slagging in the dressing room afterwards. We drew that game with Limerick and I remember Matty Forde giving out to me after saying I should have caught it and scored a goal! You'd do well to get credit off those boys," he laughs.

Tough crowd. Watch the score in all its glory here.

It's an absolute travesty that this point has gone as under the radar as it has.

Red Barry, that was something special 😱pic.twitter.com/8lh6PNQM3v

END_OF_DOCUMENT_TOKEN_TO_BE_REPLACED

That Wexford team of the 2000s, full of flair, brilliance and individuality, was a memorable one and it's fitting then that three of their most memorable genies (barring Matty Forde) were involved in the build-up to Barry's shot from heaven.

Adrian Flynn was no stranger to a 'how the hell did he manage that' moment and his ball into the brilliant Ciaran Lyng was perfect. Lyng, who played underage soccer for Ireland and senior soccer down the leagues in England, looked, until his left footed effort dropped short, like he was about to score an absolute beauty.

But the best was yet to come.

"Ciaran, Matty, there were some very talented flair players in that team. We were maybe just a player or two off of getting over the line. We competed and all the rest but we had a great bond between us, great friendships made, no medals to show for it - you'd wonder sometimes whether it'd be better to have all the medals and a quiet dressing room or a dressing room like we had and no medals.

"But we certainly enjoyed it anyway. A lot of us are still in contact, we'd meet up, go out for a few pints and it's just like it was all those years ago when we were back in the dressing room. Still ripping into each other." 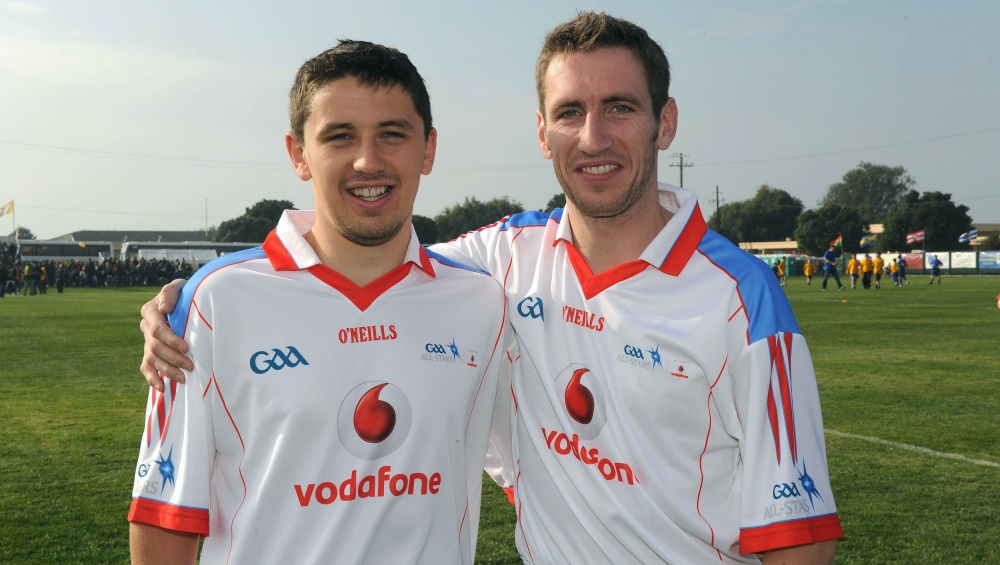 Ciaran Lyng and Red Barry on the 2008 All-Star tour to Treasure Island, San Francisco. 2008 was Wexford's best year, when they made it to the All-Ireland semi-final and were only beaten by eventual champs Tyrone.
Advertisement

Barry, who works as an agricultural consultant, was a busy man back then and he's still a busy man now. A talented all-rounder, he played dual for Wexford in '05 and now, as a 40-year-old, he's still plays both codes at senior level for his club St Anne's. All the while, he's been managing the club's football team.

"Like most people, I don't like losing. The four championship defeats were very hard to take that year in 2005 so that's why I probably gave up the dual thing. To lose in the provincials and then in the qualifiers. Four points up against the Dubs, beaten by four. Seven points up against Kilkenny, beaten by two or three. To lose games like that, that was tough to take.

"I didn't mind the winter part of it, going from game to game. I enjoyed it that way and fitness wasn't too much of an issue but it was just them losses, they were sickening."

"I came on in a couple of games earlier in the year. Got an injury and struggled to get back for the final," he says, reflecting on the year just gone.

"The body is just breaking down in the last few years. I think if I was doing more S and C, I might have been alright. Listen you've other interests and maybe you should put more into it because if you don't build yourself up, you'll be breaking down. But I'm still enjoying it anyway."


popular
"I think there are only five Kilkenny players who are guaranteed to start on any given day" - Cody's motivational methods
Gary Neville reveals Man United ignored advice to sign Joao Cancelo
Sean O'Brien could get to play England, at Twickenham, in his final game
Boris Johnson slams Jurgen Klopp for defending Liverpool fans booing national anthem
QUIZ: You have 60 seconds to answer one Premier League goalkeeper question
Gearoid Hegarty's harsh red card leads to a heated debate in The Sunday Game studio
Jamie Vardy says 'Wayne Rooney is talking nonsense' about telling his wife to 'calm down'
You may also like
1 week ago
Buff Egan calls it as Laois skin the Cats in O'Moore Park
2 weeks ago
Diarmuid Lyng's journey from the back-end of Kerry to hurling's heart and soul
1 month ago
Late free drama as Lee Chin leads Wexford's great escape against Galway
1 month ago
"There was that bit of cut and divilment in Rory when he was just ten or eleven years of age" - From one Rory to another
1 month ago
Aussie Gleeson's red card casts a shadow over the Nowlan Park magic show
1 month ago
Patrick Horgan sets up his own business as Pro Hurling gets up and running
Next Page