How could you expect to win with a stat like this?

Four-time All-Ireland club Champions Portumna were dumped out of the Galway senior club Championship by Craughwell at the quarter-final stage on Sunday.

The adverse weather conditions from Storm Brian rolled over into Sunday, creating a windy, inclement setting in Kenny Park, Athenry, and this proved a huge hindrance on the usually deadly Portumna forwards, who managed a 4-21 tally in their last 16 clash against Castlegar last weekend.

END_OF_DOCUMENT_TOKEN_TO_BE_REPLACED

Let's not forget, each and every one of their six forwards have donned the maroon and white of Galway at different stages in their career. Cousins Kevin and Damien Hayes were stars for many years, particularly under the John McIntyre regime between 2008 and 2011.

Corner forward Ronan O'Meara was a Galway minor when he was under-16, and has represented the under-21s and intermediates in recent times.

Andrew Smith captained the Tribesmen in 2015, and then you have the attacking behemoths that are Joe and Jack Canning, who need no introduction. 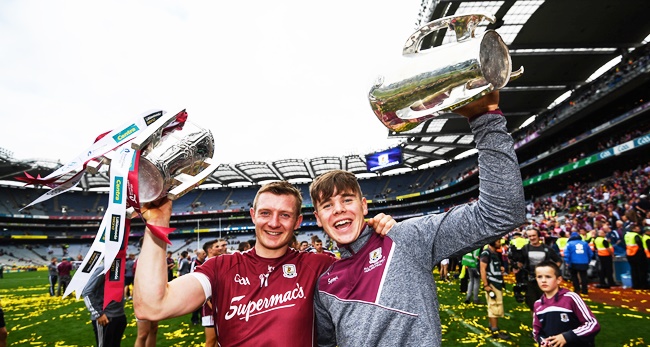 END_OF_DOCUMENT_TOKEN_TO_BE_REPLACED

On Sunday, Joe Canning was the only one of these forwards to register a score, with the favourite for Hurler of the Year raising twelve white flags, albeit with 10 of these coming from placed balls. These 12 were Portumna's only white flags in sixty two minutes of hurling.

The Craughwell backs played out of their skin, with former Galway defender Adrian Cullinane dominating in his sweeper role, according to the Galway Bay FM commentators.

Thomas Monaghan impressed up front, as did the evergreen Niall Healy, and eventually they ground out a 0-15 0-12 victory over the Portumna men.

There's no show like a Joe show, but even the real JC needs some back up.


popular
Roy Keane flatly rejects longstanding perception of ex-Man United midfielder Paul Ince
Sean Dyche set to be named Everton manager after Marcelo Bielsa talks break down
Allianz National Football League Round 1: All the action and talking points
Conor McGregor hit by car ‘at full speed’ while cycling
Roy Keane leaves ITV pundits in stitches after Pep Guardiola's pre-match interview
Quiz: Identify these 15 football clubs that are not named after a place
"I don't like to fill my time that way" - O'Hora going his own way in an era of obsessives and covering all bases
You may also like
2 weeks ago
Moran and Bradley and Cooke show that it's hard as ever to beat the big man in midfield
4 weeks ago
How many of the 65 county senior champions for 2022 can you name?
2 months ago
"I appreciate Moycullen now more than ever" - Cooke's American lifestyle from a Moycullen base
2 months ago
GAA JOE Team of the weekend
2 months ago
Results from all around the grounds on a blockbuster day of provincial action
2 months ago
GAA JOE Team of the weekend
Next Page