Stats: Jonathan Walters has the best shot conversion rate in the Premier League this season

Jonathan Walters is the deadliest striker in the Premier League so far this season, statistically at least. The Stoke City forward has scored seven goals this season, with 38.89 per cent of his shots hitting the back of the net.

According to Opta stats, as part of a feature in The Guardian, the Ireland international is the most likely to convert a chance, ahead of players such as Diego Costa, Wayne Rooney and Harry Kane. Manchester City striker Sergio Ageuro fails to make the top ten. 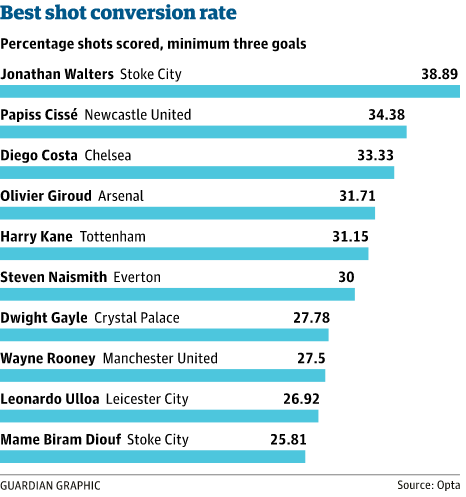 One must factor that Walters often doesn't play at centre forward for Stoke, and therefore doesn't take as many shots as the oter names on the list, but it's still an impressive feat.

The Guardian report also revealed who has the worst shot conversion rate, and two England strikers are in the bottom ten.

Arsenal forward Danny Welbeck needs almost ten shots to score a goal, while 12.6 per cent of Daniel Sturridge's strikes result in a goal. 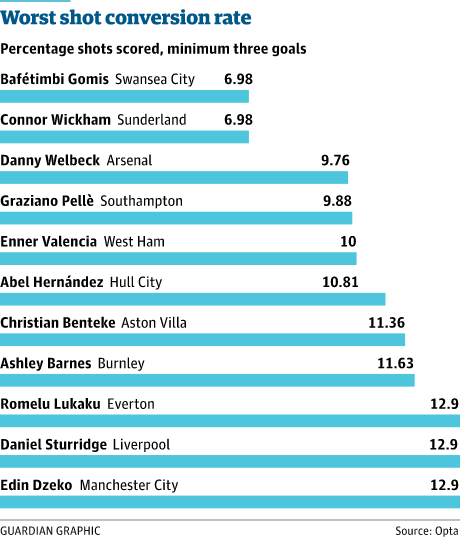 
popular
Jacob Stockdale and Johnny Sexton not spared by English press
'Were they up for it more than us? That's my responsibility' - Andy Farrell
ROG hits the nail on the head assessing Ireland's performance
Baz & Andrew's House Of Rugby - Twickenham carnage
QUIZ: How well can you remember this season's Premier League results so far?
Triple Crown wrenched away as England scrape Ireland off their boots
Tyson Fury reveals what happened when he sparred Anthony Joshua
You may also like
1 week ago
Three players Solskjaer wants compared to three Man United are after
4 weeks ago
Charlton want Troy Parrott on loan until end of the season
4 weeks ago
Fall guy Solskjaer is not going anywhere
4 weeks ago
If Twitter had been around for Eric Cantona's kung fu kick it might have looked something like this...
1 month ago
Teenage sensation Jude Bellingham facing biggest decision of his career
1 month ago
Manchester United make smart move for Donny van de Beek
Next Page