We spoke to the man who got 'chat shit, get banged' tattooed on his arse cheek

Back in January, you probably didn't expect Leicester City to win the Premier League.

You probably didn't even expect them to finish in the top four, after a goalless draw with Bournemouth had them seven points ahead of fifth-placed Manchester United with 18 games remaining.

Still, you probably wouldn't have pledged to get the words 'chat shit, get banged' tattooed on your arse cheek if Jamie Vardy and Co somehow did achieve the unthinkable.

But you're not Devan Slater.

Devan, a 20-year-old Spurs fan from Scunthorpe, made his bold prediction on the eve of the Foxes' FA Cup third round meeting with Tottenham. Four months on, with Leicester crowned champions, he went through with his pledge.

SportsJOE caught up with him to get the full story.

Kept to my word and got "Chat shit get banged" tattoo'd on my arse cheek @vardy7 @LCFC pic.twitter.com/Wvw3e0ClDS

"When I sent the original tweet I was discussing with a few friends how next week Leicester would slip up or the week after they'd crumble but it never seemed to happen," he explains.

"Fair play to LCFC they do deserve the title for how they've played this season, Week after week I would tell myself this is when they'll start to drop off, start to lose games but It just never happened." 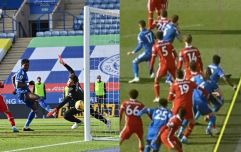 END_OF_DOCUMENT_TOKEN_TO_BE_REPLACED

While others might have chickened out when Leicester closed in on the title, there was never much danger of Devan doing the same.

"I think you'd struggle to find anyone who actually wants "Chat shit get banged" & a bottle of blue WKD on their arse cheek, but with my group of mates if I backed out it would have been 10 times worse for me in the long run, they'd never let me live it down," he says.

It's that man again pic.twitter.com/D7t0PGN4tk

He's not sure if Vardy is aware of the ink at this stage - in fairness, the England striker and his club team-mates have been fairly busy of late.

But after Sunday's Premier League finale at Stamford Bridge, Leicester's players will have a bit more time on their hands to see what they've been missing out on while focusing on the most unlikely title charge in decades.

And while it might be a long-shot (albeit not as long as Leicester's 5,000/1 title odds), Devan already has a plan in place on the off-chance that Vardy himself gets wind of the bet.

"Me and a few friends joked about Jamie Vardy viewing the tattoo and I thought it would never be possible but I never expected this response from it," he adds.

"I said to my mates If he did see it I'd ask if he wouldn't mind putting his signature below the tattoo, hopefully that could one day be arranged and I could have Jamie's signature tattooed on me as well." 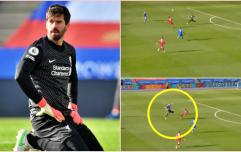 END_OF_DOCUMENT_TOKEN_TO_BE_REPLACED

Beyond the initial impact ("having to sit down 9 hours a day wasn't fun the day after"), the attention has largely been positive.

Devan notes that "a lot of good-looking women have seen my arse on Twitter," while plenty of people have applauded him for actually going through with his pledge.

And looking to the future, he's happy to have a great story to tell his kids or grandkids a few decades down the line.

He has no plans to get it removed, at least not until he's had the chance to meet Vardy and potentially fulfil part two of his tattoo masterplan.

"It's a funny story and a great talking point, and because Leicester winning the league is such a fairytale story its also something for me to remember it by and something to say as it is one of the greatest things that has happened in English football in a long long time," Devan explains.

"When I'm older the chances are I'll regret my actions but we all do dumb stuff when we're young and I guess that's part of being young really.

"I think when I get to my 50's & 60's I'll still enjoy it as much as I do today as It'll be a good memory for me to look back on and remember the stupid stuff I did when I was young."


popular
"Twas often I felt like firing a boot at him' - Micko's words of consolation didn't go down well in Cork
The SportsJOE 12 o'clock quiz | Day 328
"I couldn’t speak, but Rhys could see that something serious was going on"
Springbok star Eben Etzebeth's lockdown workout would break most of us
Endearing Keith Earls story proves he will never forget his roots
Eric Cantona confirms famous Roy Keane story about him
Why Jude Bellingham wears the No. 22 jersey
You may also like
2 months ago
"You don't play for Brendan Rodgers if you don't do the dirty work. It's as simple as that."
3 months ago
The real reason behind James Maddison's remarkable football boots
8 months ago
Liverpool edge ahead of Leicester in battle for Olympiakos star
8 months ago
Leicester interested in Barcelona youngster with €500 million buy-out clause
1 year ago
Leicester City have form for upsetting the apple cart, and Liverpool shouldn't take them lightly
1 year ago
'Harry Maguire will go in there and he'll be United captain'
Next Page