A few days ago, we put out a plea.

Derry's Oxford Bulls had been training since October 2015 but they had no one to play against.

The group of footballers with Down Syndrome had been working hard to improve their skills and get better as a team, but had no fixtures to test themselves with. 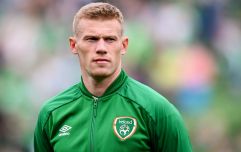 END_OF_DOCUMENT_TOKEN_TO_BE_REPLACED

They had new jerseys, new footballs, playing cards of themselves, a full coaching staff including Noel Crampsey, Joe Kelly, Luke Crampsey and Paul Morrison, but they were lacking that vital element of every sport - the competitive aspect. There was no opposition to play them.

It was a real shame, so we put the plea out for anyone or any team to answer the call and help these guys get a game.

Please help get these lads a game https://t.co/HvpbTMn06L

After that article went out, something wonderful happened, as Kevin at Event Images and Video revealed in a Facebook post on Wednesday evening. They didn't just get any old team for their first ever friendly, they got a team that featured Republic of Ireland international James McClean.

Check out Kevin's report on the game in full as well as the highlights video below.

"Well what a week this is turning out to be for the Oxford Bulls. Sunday morning and the lads lined out with the Derry Pelé himself, Paddy McCourt. Monday night then and JOE.ie's article about the lads went stratospheric. We've received literally hundreds of offers of matches, help with travel & accommodation, advice and assistance on a monumental scale - we've even been offered new training tops by a sportswear company down south. I've answered as many messages as I could but still have to get back to some more clubs and individuals."

"Then today, the Oxford Bulls played their first friendly match against a strong JAMES MCCLEAN SELECT team, captained by Republic of Ireland international James McClean himself ."

"Our boys were a bit star struck when he first walked in, but after James put them through their paces in the warm-up, they were ready to take him on. The McClean Select included former Derry City player Vincent Sweeney and current Coleraine centre-forward Jordan Allan as well as James's bother Brian in their ranks !! Although it was young Nathan Moore who stood out head and shoulders above the rest of his illustrious teammates."

"The game itself was a tight affair as the two McClean brothers signalled their intentions early on that this match was to be anything but "friendly". Tackles were flying in thick and fast, when the Oxford lads sneaked into a quick 2-0 lead - Conan and Keigan with the opening goals. McClean's lads gradually began to get back into the match when Nathan Moore scored the first of his 4 screamers from outside the box. Tiernan and Man of the Match Kyle wrestled with the midfield and provided loads of ammunition for top scorers Keigan and Conan to test the visitors defence. Shaun was detailed to stick to James McClean like glue and the West Brom star found it hard to shake off the attentions of the Bulls midfielder - who even resorted to hugging McClean at once stage to stop him in his tracks !! Meanwhile Adam had a quiet game - seemingly star-struck by the appearance of his Ireland hero on his home patch !!! Jack had no such qualms about tackling the premiership star, and a few of JR's tackles wouldn't have looked out of place at Ravenhill. The game was eventually decided by young Caoimhin who struck in the last minute to give the Oxford Bulls their first official win."

"The session finished with a penalty shoot-out with our illustrious visitor going into nets for the lads !!! (Now I'm not gonna reveal if he saved any, but suffice it to say none of the Oxford Bulls missed the target !!!)"

"So I just want to say a huge thank you to James McClean and his mates for coming down to see our lads today and giving them their first big game experience !!! The lads are still buzzing and our Adam is still a little Star-struck !!! And I don't think James will ever appear in a more chaotic team photo as he did today (check out our photos To see what I mean lol), and yet he handled it with all such great patience and grace. So thank you James and co. for a most memorable day !!! As usual our wee video will follow shortly so watch this space !!"


popular
Here's all the GAA games on the tube this weekend as the provincial championship heats up
GAA club transfers that shocked the county: Jason Sherlock
Red cards, slips, heroes, villains and last second equalisers - Derrygonnelly's extra time win over Dromore had it all
Fermanagh footballer opens up about losing her mum to suicide and urges people to seek counselling
Jordan Larmour enjoys satisfying bit of revenge on Mack Hansen
Ronnie O'Sullivan on why he staged sit-down protest during UK Championship defeat
Ruesha Littlejohn gate-crashes Katie McCabe's interview after another player-of-the-match display
You may also like
1 year ago
James McClean could be in trouble for reaction to his red card
1 year ago
James McClean opens up on sickening, Covid-related hate mail
1 year ago
James McClean fined by Stoke for balaclava Instagram post
1 year ago
QUIZ: You have 90 seconds to name every team James McClean has played for
2 years ago
James McClean knew exactly what he wanted to say to the Danes
2 days ago
Borussia Dortmund cancel 67,000 tickets for upcoming match against Bayern Munich
Next Page