Wes Morgan's fingerprints are yet to rub off the Premier League trophy, but one of his Leicester City team-mates is already looking forward to next season's title challenge.

Jamie Vardy has top-scored for the Foxes en route to his Football Writers' Player of the Year award, and wants to make sure Claudio Ranieri's team are not just a one-season wonder.

The England striker told ESPN FC he thinks he and his team-mates have the tools to launch another title challenge, despite the added distraction of Champions League football next season. 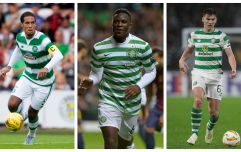 END_OF_DOCUMENT_TOKEN_TO_BE_REPLACED

"With the lads that we've got, everyone's close together and we fight for each other so who's to say it won't [be a repeat]?" Vardy said.

"We've enjoyed our football and winning games so hopefully we can carry on taking that into next season and just go out and enjoy the experience and hopefully put the performances in that gets us points."

That sentiment rings true for Leicester's European ambitions too, with the Champions League first-timers guaranteed to be among the top seeds in the group stages.

If Leicester can keep their squad together and add some depth, it would take a brave man to write them off.


popular
Rangers legend says he and Roy Keane didn't speak during Man United spell
Chris Sutton praises and throws subtle dig at Rangers after Europa League final loss
The coolest customer in hand-ball hoping to carry on the family tradition for Kilkenny
Rhodri Giggs accuses Gary Neville of hypocrisy over Salford sacking
FootballJOE's Career Path Quiz: #6
PSG offer Kylian Mbappe 'complete control' with insane contract offer
"I think there are only five Kilkenny players who are guaranteed to start on any given day" - Cody's motivational methods
You may also like
1 week ago
How Toni Kroos helped Carlo Ancelotti mastermind late comeback, from the bench
1 week ago
Why Chelsea will land huge cash windfall if Real Madrid beat Liverpool in Champions League final
1 week ago
Jurgen Klopp slams UEFA over Champions League final ticket allocation for Liverpool fans
2 weeks ago
Toni Kroos reveals story behind nearly signing for David Moyes' Man United in 2014
2 weeks ago
Gary Neville copped it from Liverpool fans after getting a tad carried away
3 weeks ago
UEFA set to scrap two-legged Champions League semi-finals
Next Page