Ciaran Clark is fast becoming one of our favourite Republic of Ireland players.

The Aston Villa centre half is a gritty sort (away from the ocean and David Attenborough documentaries, that is).

Even when his stock seems to have dipped at club level or on the international scene, he hangs tough, he's always there, and he's stepped up when asked.

His performance against USA in the last Ireland friendly has put him back in Martin O'Neill's thoughts and he won man of the match with Villa's last two wins.

But, do you know what, he's even better craic than he is a defender and his interview today on the official Aston Villa website is deadly.  Here are a few things you probably didn't know about Ciaran Clark:

1. He's a sucker for a Christmas jumper
"Of course, I have a couple of Christmas jumpers.  I was pleased with my one from last year but the one this year tops it definitely.  There's Santa Claus on the front and as I move he roars out 'Ho, Ho, Ho.'  I am sure I will give it an hour in the house and it will be doing everyone's head in!"

2. His favourite Christmas film is...
"I love watching Home Alone 1 and 2.  They're just brilliant festive films that you never tire of watching when Christmas comes along."

3. He watched I'm A Celebrity... for a week
"I watched I'm a Celebrity, Get Me Out Of here - but I switched off when Jimmy Bullard was voted off.  Everyone in football knows that Jimmy is a bit of a loon and a real funny character.  He was brilliant to watch and I was gutted when he got booted out in the public vote.  I didn't really watch it after that."

4. Ciaran Clark wants to appear on I'm A Celebrity
"I must admit it's the one reality show I don't mind watching.  And it's the one I'd go in.  Forget about singing and dancing and cooking, I think I'd prefer being in the jungle with snakes and bugs. I'd give it a go.  I'd enjoy some of the tasks - they're brilliant. I'd put myself forward. I'd probably draw the line at drinking deer blood though. But I'd give the show a go certainly." 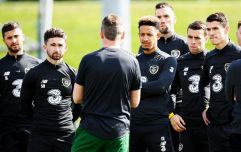 END_OF_DOCUMENT_TOKEN_TO_BE_REPLACED

5. He joined Villa as a striker and he wasn't bad at all
"I was a fan of Thierry Henry when I was younger - and I actually started at Villa as a striker.  As we moved up the age groups, I steadily changed position in the team.  Then away at Derby one afternoon, the centre-half got injured and they said 'in you go Ciaran.'  My centre-back partner was a young lad called Sam Simmonds. He was laughing at me because he never dreamed of playing alongside me in the heart of defence. He thought it was weird me playing at left-back!
"Back when I started out, I was pretty prolific as a striker to be fair. I wasn't bad at all."

6. Ciaran Clark played in goals for Villa because he didn't like the look of the replacement
"I was playing in the youth team and our goalkeeper Thomas Dau went down injured.  It was against Bristol City and they were thinking of replacing Thomas with James Collins Jnr. He'd told them he'd played in goal before.
"Our goalkeeping coach was warming him up. I looked around and he was dropping balls and they were fizzing past him. I thought 'no way.' And Tony McAndrew, our youth coach, just looked up and said 'we can't be having this.'
"I told him I'd go in goal and he agreed. I did the warm-up and I was steady enough. They were happy."

7. Art was his favourite subject at school
"I really loved art at school.  I must admit I originally chose it as one of my subjects because I thought it would be the least hassle and would be simple to do.  But I had a passion for it at the end."

8. He's afraid of the ocean
"I hate going in the sea! I know people will think that's a strange one.  I have been on loads of holidays in years gone by with the family and friends. I'd be on boats and jumping into the sea.  But over the years, that has totally stopped. Family and friends head into the sea and ask me to join them and I just end up saying 'No there's not a chance of that.'
"I will go and paddle in it up to my toes but no further."

9. Documentaries scare him
"I love watching the David Attenborough documentaries like 'Creatures of the Deep' and 'The Blue Planet.' It's amazing what's out there in the ocean.  Maybe I have watched too many of them!"

10. His favourite Christmas song is...
"Music-wise, I love the Pogues - Fairytale of New York. It's an absolute classic."

You may also like
1 week ago
QUIZ: Can you beat the clock to name Ireland's record goalscorers?
3 weeks ago
"My gut was like, 'Stick Shane Duffy up front and let's go long'"
3 weeks ago
Our Ireland player ratings after a ghastly loss to Finland
4 weeks ago
An exciting Ireland XI we could easily start against Bulgaria
1 month ago
"I hope it doesn't de-rail his career" - Northern Ireland unhappy with Mark Sykes switch
1 month ago
Jeff Hendrick expected to chose Newcastle United over West Ham
Next Page